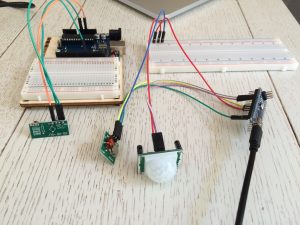 The emitter is on the right, associated with the PIR sensor I purchased at Banggood. The receiver is on the left, quite simple circuit. I will later add an ESP8266 module that will send a message to API ThingSpeak, which will then relay via Twitter or mail for instance. Next step will be to link this with a notification center to interact with MyHome app.

Check my github for the transmitter and receiver code. Caution, I’m using VirtualWire library. Pins are directly set in the library so use 12 to emit, 11 to receive. You can also use RadioHead or RC Switch.

Caution with the PIR sensor, connections may change according to the version or manufacturer. I had to take off the fresnel lens to see the VCC/GND/DATA pin connection.

My objective is now to have several modules of this type. Main issue will be for the receiver, having several transmitters. If it receives messages at the same time, the checksum will make it fail to see them. This is why I started to give kind of an ID, checking the first letter of the message I’m sending. However, as this is designed to be an alarm, the thieves would probably enter by the same door, thus one single message sent at once.

Who's Online : 1
Ce site utilise des cookies pour vous fournir l'expérience la plus adaptée en se souvenant de vos préférences et de vos dernières visites.We use cookies on our website to give you the most relevant experience by remembering your preferences and repeat visits. By clicking “Accept”, you consent to the use of ALL the cookies.
Do not sell my personal information.
Réglages - Cookie SettingsAccepter - Accept
Manage consent

This website uses cookies to improve your experience while you navigate through the website. Out of these, the cookies that are categorized as necessary are stored on your browser as they are essential for the working of basic functionalities of the website. We also use third-party cookies that help us analyze and understand how you use this website. These cookies will be stored in your browser only with your consent. You also have the option to opt-out of these cookies. But opting out of some of these cookies may affect your browsing experience.
Necessary Toujours activé
Necessary cookies are absolutely essential for the website to function properly. These cookies ensure basic functionalities and security features of the website, anonymously.
Functional
Functional cookies help to perform certain functionalities like sharing the content of the website on social media platforms, collect feedbacks, and other third-party features.
Performance
Performance cookies are used to understand and analyze the key performance indexes of the website which helps in delivering a better user experience for the visitors.
Analytics
Analytical cookies are used to understand how visitors interact with the website. These cookies help provide information on metrics the number of visitors, bounce rate, traffic source, etc.
Advertisement
Advertisement cookies are used to provide visitors with relevant ads and marketing campaigns. These cookies track visitors across websites and collect information to provide customized ads.
Others
Other uncategorized cookies are those that are being analyzed and have not been classified into a category as yet.
Enregistrer & appliquer